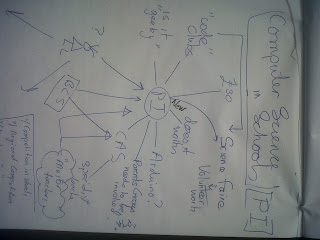 The question was Computer Science in Scools with the Raspberry PI

Various ideas from different people from different countries were
discussed.
Comparing the UK system with the Scandinavian and American systems
generated some interesting ideas on how to proceed.

It was obvious the next generation of computer professionals need in the
UK need more help (& choice), and the group thought that the
introduction of a cheap hands on approach was a good thing. Adoption
some of the ideas based upon ‘competitions’ between schools was proposed
as a good idea of engaging students as is done in the states on all
areas of science (not just computer science).

Inclusion of the parents in this was mentioned. Without parental support
such ventures it was suggested would not be as successful.